And He said to them, “Don’t you understand yet?” (HCSB) 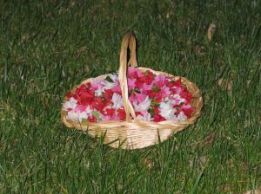 I was having coffee with a friend and talking about his daughter who was recently the flower girl in a wedding.  They had heard so many stories about the flower girl refusing to walk down the aisle that everyone in the family had made a big deal about her walking down the aisle and throwing the flower petals. Every conversation included walking down the aisle and throwing the flower petals. At the rehearsal, the wedding director sent the little girl into the church sanctuary with instructions to walk to the front and not to forget to throw the flower petals.  When she stepped through the door, she planted her foot, did her wind up, and threw a handful of flower petals!  Her dad is thinking of checking out a future for her in the major leagues!  Her parents thought they were very clear in what they were saying.  She thought she was very clear in what she was hearing.  They were using the same words but they definitely were not meaning the same thing.  I have always told my grandchildren they only have one rule to remember when they are with me: “no getting hurt on my watch” One time my granddaughter looked at me and quite seriously, and with a hint of panic, said “I don’t know what to do.  You aren’t even wearing a watch!”   I thought I was very clear with what I was saying.  She thought she was quite clear with what she was hearing. We were using the same words, but we not meaning the same thing.  Church people do that so often.  We say, “Let’s go witness”, and others are thinking “But I don’t want to go to court”.  We say, “That person needs to be saved”, and others are thinking “But I’m not an EMT”. We say, “Are you lost?” and others are thinking, “No. I have GPS”. We know exactly what we are saying.  They know exactly what they are hearing.  Lord, sometimes it is just like when You talked about the yeast of the Pharisees in Mark 8 and the disciples thought you wanted them to buy bread.  We are all using the same words, but we are not meaning the same thing. I know I do that with You. I know there are times You must look at me the same way You must have looked at the disciples and said “You STILL don’t understand?”  Lord, I want you to be able to use me just like You were able to use the disciples.  They misunderstood the words sometimes.  They didn’t ask the questions they should have asked because they were too busy asking about things that didn’t matter.  Lord, thank You for loving me and having patience with me.  I pray that even though I sometimes don’t get the words right, my heart will always be right.